Back to blogging after like a month of being inactive. And the excuse this time is that I had so much editing to do, that I just ran away from anything that required me to open my laptop. Believe me, I hate anything related to weddings right now because I’v only been thinking about them this past one month.

First it was the preparation that went into all the planning for covering weddings, then came the weddings themselves and finally the mammoth task of editing thousands of pictures and shortlisting which are worthy enough to be given to the client. Phew! Whoever said weddings are supposed to fun and frolic, was never a wedding photographer.

I Reached the venue at 7 in the morning on her wedding day and she was sitting there all ready and waiting for the rituals to begin. I can understand her not being able to sleep because of all the excitement but the poor girl went to bed at 2 in the morning after dancing for hours and here she was all ready and smiling.

Her’s was a Sikh wedding which take place in the morning. Usually north Indian weddings take place in the evening so the brides have a comparatively comfortable day and the madness begin at night. But here, the bride was supposed to be up and ready early morning and get done with all the rituals so that she could reach the parlor and meet her beautician at 9.

So when all the relatives were ready, the first ritual of the day began. The Chooda/Choora Ceremony.This is basically a Punjabi cultural ceremony where the Bride’s maternal uncles slip red and ivory bangles on her wrists which she would wear for the next 40 days. Bangles have a huge importance in the Hindu culture and married ladies are supposed to wear bangles all the time. The Chooda/Choora symbolizes that her wrists would never be empty from now on. In earlier days, the bride was supposed to wear her chooda for at least a year and the bride was refrained from doing any heavy household jobs. After the first anniversary, a small homely ceremony was held where the In-Law’s would remove her Chooda and Glass or gold bangles were placed on her wrists. The Chooda was then taken to a river and a small prayer was held after the which the Chooda was left to float in the river. My maternal grandmother’s Chooda was made of pure ivory and I remember her telling me that her chooda was floated in the river ‘Ganga“. 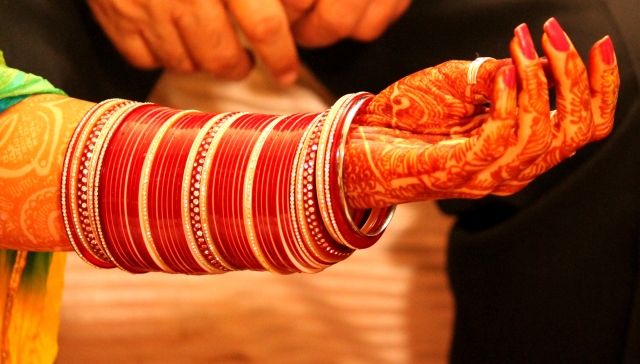 Also, After the Chooda ceremony, the family of the bride hangs ‘Kalire‘ on her Bangles. The kalirey traditionally were made of a thin metal usually golden or silver in color, and coconuts. The metal symbolizes wealth and prosperity for the bride and groom and the coconuts symbolized that the bride never runs out of food in her new home. 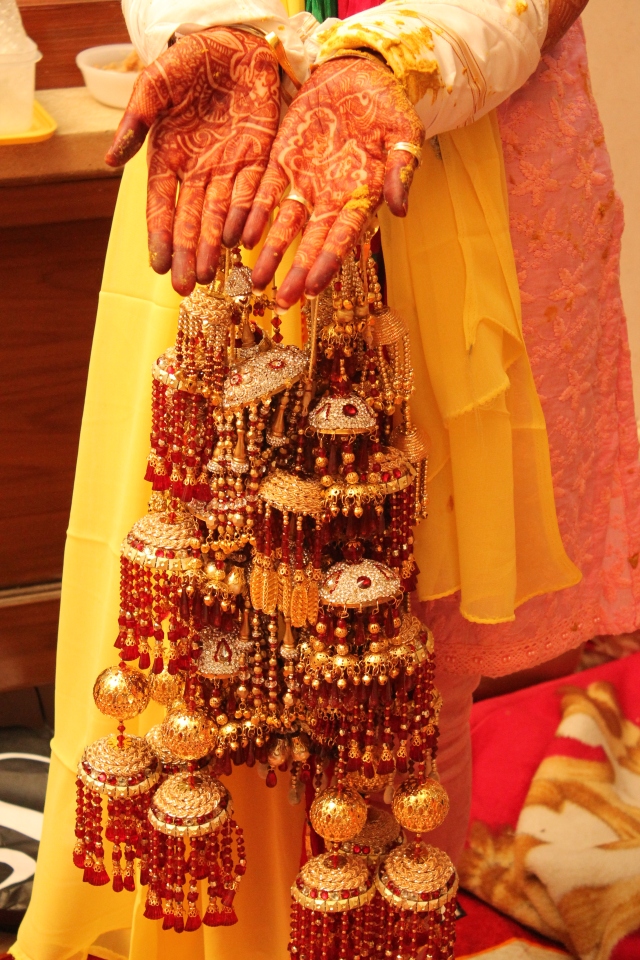 After this ceremony, The bride picked up her dress and jewelry and headed to the parlor to get ready and actually become a Bride.

I don’t know how the brides deal with it, but getting ready for the wedding ceremony according to me is probably the most agonizing part of the entire wedding. I mean I just sit in a corner and keep clicking pictures, but the poor bride has to sit on that chair for like 2 hours and get her make up and hair done and then get her lehenga draped. I shudder at the thought of going through this on  my own wedding. Though I’v seen brides who really enjoy the ‘getting ready’ part, I find it a torture. Sure I want to look my best on my wedding, but to sit and get your makeup done for like 2 hours is scary! Oh well! God help me and the beautician on my wedding day. I’l probably have to pay her double of what she charges to handle my tantrums as well. 😛 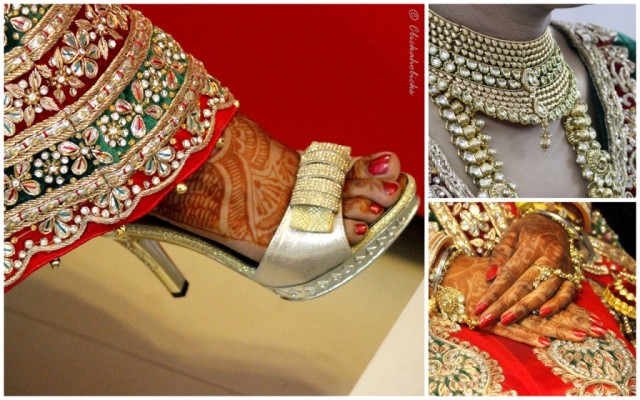 So, now when the bride is ready and is all anxious for the baraat (The Groom and his relatives) to come, her sister’s and friends all come to her. Sister’s play a huge role in the wedding for a bride. They help the bride get ready, chose the best Bindi, give secret signals on whether the make up is going good or not, and are basically turn into a superwoman of sorts who can handle everything from getting extra hairpins to keeping the bride calm in such times when the bride is ready to explode with nervousness.

The bride sits in this small powder room reserved for her at the venue, waiting patiently for her knight on a white horse to come as everybody around her goes into a tizzy the moment they come to know that the baraat is about to reach.

And that is when the actual wedding begins… 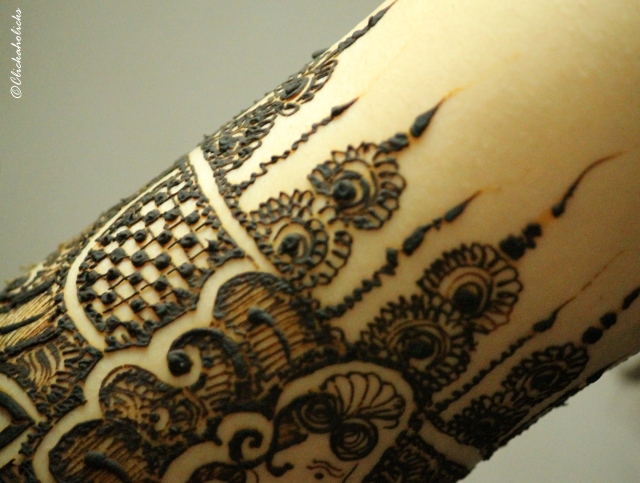 I’m sorry for not being active here and completely avoiding my poor blog, but these last 15 days were choked full of my ‘Things To Do List’ and I barely managed any time to even sit down and breathe. I’v been juggling my college, my cousin’s wedding, my friends wedding and my photography assignments all at the same time. Believe me I look like a zombie these days. But more on that later. 😛

I’v been so involved in weddings these days, that I thought I’l share with you guys what all actually happens in an Indian wedding that everybody is exhausted by the time the wedding is over.

The actual rituals where the bride is involved begin after the Sagan Ceremony. At this particular ceremony, the bride and the groom are given gits from their respective “To be in-law’s”. It marks the beginning of the actual wedding ceremonies.

Both the bride and the groom sit down for a Pooja and are then bestowed with gifts.

Next comes the Mehendi and Sangeet Function which is usually held a day before the wedding. These day’s this is an elaborate function usually with cocktails. In earlier times, these were very small homely functions where the bride used to apply mehendi on her hands and feet and the women sang wedding songs and thus created that atmosphere of a “Vyah da ghar” which means the wedding home.

Now, this function is a BIG thing for everybody and usually the most enjoyable one as most of the family is relaxed at this time and is having a good time dancing and stuffing their face with the chicken tikka’s and malai paneer!

I love the mehendi function. More so because I love mehendi so much! The bride and all the women in the family apply mehendi on their hands and the designs are so pretty! And this is when the all the husband’s would lovingly feed their wives all the yummy food that is being served at the wedding, and move their hair away from their face as the wives can’t touch anything otherwise their mehendi would get smeared and the designs would be ruined. It takes about half an hour to 2 hours for the mehendi to dry depending upon the weather, and the amount of mehendi applied.

Usually the mehendi is held in the afternoon so that the bride and ladies can enjoy the sangeet night where the actual wedding party begins. And the sangeet night is when everybody goes bonkers! They dance and laugh and enjoy themselves to the core. The music does not stop till the time everybody is drop dead tired and can barely lift a finger.

I’m about to cover one such fun mehendi and sangeet night in a few days. And i’m sure I’m gonna have ton loads of fun! I’l tell you more about it when I come back from there. 🙂