All he remembered was that deafening noise. And the fire. It was everywhere. One moment he was talking to her on the phone, the next moment he was on the road bleeding and staring at a person who stared back at him with cold bloody eye’s.

It took him a moment to realize what happened. There was smoke everywhere. And fire. People, vehicles, trees….everything was burning.

The busy market had turned into a war field.

People screaming for help, limbs scattered around, a child’s doll smeared with someone’s blood. That was all he could see.

He tried moving but there was something stopping his legs. He tried to get up, only to see a woman lying dead on his feet. He tried to push her away.

He wiggled his toes. That was a good sign. Despite the shock he could feel his toes.

He turned the woman’s body and screamed in horror. She was the lady with a baby girl in her arms who he had let get ahead of her in the line. She was here to get a birthday cake for her daughter. “It’s her first birthday”, she had told her beaming with happiness.

He looked around and saw the little girl. He crawled to her and checked her pulse. It was faint. He heaved a sigh of relief.

His head was spinning. People rushed in to find any survivors. A paramedic came rushing to him. He pointed at the little girl. Two people had to support him to make him stand up. He was much too shocked to reply to any of their questions.

Her face was the last thing that his mind conjured up before darkness took over.

He tried to move his head. His body felt like lead. There was something constantly beeping. He wanted that to stop. And far away he could hear a woman hysterically crying and saying “Is he going to be OK?”.

“The doctor’s are saying that he’s in shock, but his vital stats are fine. He just needs rest.”. That was all he heard before he drowned into deep sleep.

Somebody was touching his arm. He could feel a prick but he was too tired to say anything. Home. He wanted to go home.

He could feel somebody’s breath on his cheek. Somebody was holding him lightly and had fallen asleep with his head on his shoulder. He moved his head and that person’s hair brushed against his nose. He could smell vanilla.

He moved a little more and saw her sleeping. It was her. She was here! He touched her face and she woke up with a start.

“You woke up! Are you OK. I was so worried. You’ve been sleeping for almost 38 hours and I just…..”, she cried. He put his arms around her and hugged her.

“I love you”. That was all he could say.

Home. That was what he remembered. He had wanted to go home. He was going home when that explosion took place. Home.

There in the hospital, with all the scary machines and tubes attached to him, he hugged her like there was no tomorrow. He held on tightly to her, realizing how home was anywhere he could be with her.

He closed his eyes and silently thanked god.

He was back with the love of his life, and it felt good to be back home. 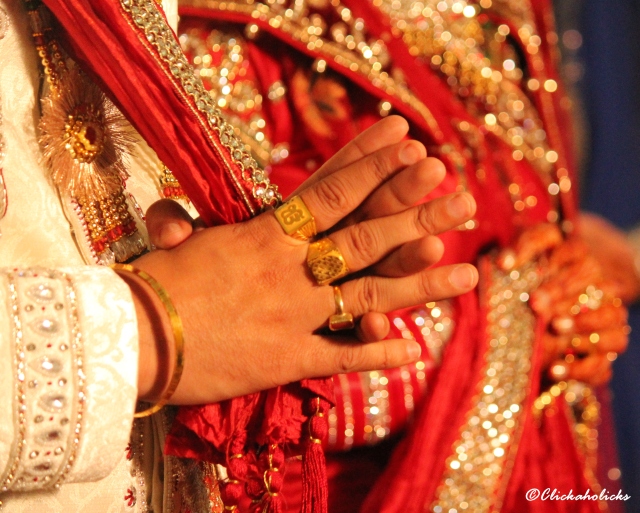 Punjabi wedding are THE most fun thing ever. Don’t get me wrong. All weddings are fun, but the madness in Punjabi wedding always manages to reach a new high. And this time, the wedding was of my cousin sister who flew down from the States to get married in our pind.

Now those of you who are not familiar with what a pind is, it’s our village where our ancestors lived and our family has an ancestral home there. So most of the weddings are held there and our huge family which is scattered all over the world come together and goes absolutely crazy.

And when I say crazy, I mean they literally go crazy. There is drinking and laughter and dancing everywhere.

And dancing is what I’m going to talk about, because there are various stages to dancing in our family weddings.

There is a big veranda at our place and the DJ is usually set up there. It’s big enough for the dancers in our family to to jump around without bumping into someone or something.

Stage 1. Now when the DJ starts playing, nobody initially bother’s about what music is being played and everybody is just talking to each other and meeting everybody. After like half an hour, somebody would realise that the music is playing and and would start urging people to come and dance. A few enthusiastic kids would start dancing and their parents would scramble around to get a good picture of them on their I-phones.  They would be tapping their feet and you can see that they want to dance, but nobody wants to be the first one on the dance floor.

Stage 2. Somebody(usually my grandma) would then go up to the dance floor and start dancing. Slowly everybody who is cheering for her would come up and finally start dancing. At this stage nobody is bothered what song is being played as long as everybody is on the dance floor and the noise level is enough to wake up 5 villages around our village.  Everybody is high on excitement and happiness and the dances are beyond what anybody can imagine and what I can write. Basically it’s a bunch of grown ups who will behave like kids who are high on candy! You dance, get tired, go and eat some finger food and come back again.

Stage 3. This stage comes at around 11:30 at night when all the elders will start cribbing about the loud music and will ask everyone to go to bed because next day the rituals start early in the morning. The music is stopped for like 15 minutes and the moment the elder’s go, the DJ is on again and everybody is back on the dance floor.

Stage 4. All the men and guys who were earlier at the bar and had not bothered about dancing, come to the dance floor and begin what can not be called dance. It’s usually a drunk version of kathak, bharatatnatyam and bhangra all combined into one. The people watching first laugh their hearts out and finally can not resist joining in.This is the point where after every 10 minutes somebody (usually  my dad) would scream “OK everybody! This is the last song”, and no body would pay attention. The music will keep on playing till the time everybody realises that it’s getting really late and they all need to up the next day at 5 in the morning to get ready for the rituals.

Stage5. Everybody is drop dead tired but are planning about dancing again the next day after the wedding ceremony. And before they can finish making their plans, they all fall in their beds and have no clue about anything that is happening around them.

I’m a daylight insomniac. That is because I have the sleep cycle of an owl. I’m wide awake with all my senses on alert at night and I laze around all day at work trying to stifle down my yawns because then everybody complains that looking at me makes them feel sleepy!!

So all the night I keeping trying to get some sleep but instead as the night gets darker, my sleep starts vanishing, and I end up being an insomniac at 2 in the morning. There have been tons of things that I tried to get myself to sleep at an appropriate hour but all of them were a massive failure.

I’v tried having warm milk before I go to bed. Avoided all kinds of caffeine, worked myself to death so that I drop dead tired on my bed, I even tried reading our constitution but none of them worked.

So every night I end up being wide awake which results in my being totally sloshed at work.

People usually ask me what do I do when I am up at night. And while I try and answer this question to the best of my abilities, they start suggesting me things that I can do. Like some say I should get all my pending work done, or iron my clothes or think what I want to wear to work tomorrow and save time in the morning. I always nod and give a thoughtful expression to them so that they stop bugging me. I try and do all that people suggest me but actually here’s what I end up doing :

1. Look around my room and think I really need to clean it.

3. Take out my I-pad and randomly watch videos on you tube.(Wedding videos are my current obsession)

4. After an hour of watching videos gets bored and start watching random episodes of Friends, HIMYM, Big Bang theory, or at times even Mahabharat.

5. Take out my camera and think ‘I’l click some pictures of the calm night’ only to realise that there are bats flying outside which scare the shit outta me. (There is a family of bats in the garden that my house faces.)

6. Open the fridge to find something to eat. Stand there for like 15 minutes and then walk back to the cupboard where all the biscuits and cookies are kept and stuff my face with them.

7. After finishing 8 packs of cookies realise that you were supposed to be on a no sugar diet and in that guilt eat another pack of chocolate chip cookies.

8.Lie down thinking that is the only way to sleep, only to end up staring at the fan for like an hour.

9. Wondering whether I should call one of my bestie and ask her to help me get some sleep.

10. Open Facebook and stalk all my high school friends profiles.

11. Look at the clock and realise it’s 6 in the morning so I should actually get some sleep now. Fall asleep the moment my head hits the pillow and wake up at 10 only to realise that I’m late for work. Again.